Industry Professor (Indigenous Workplace Diversity) Nareen Young was delighted to be asked to be one of a number of advocates for the Human Rights Commission’s ‘Racism: It Stops With Me’ campaign a few years ago and to be profiled by the Commission as a key advocate last week.

Industry Professor Young has worked around workplace diversity for many years and is very committed to the recognition of a culturally diverse Australia with the promotion of Indigenous culture it its core. Her work at Jumbunna in promoting Indigenous workforce diversity is key to this goal. 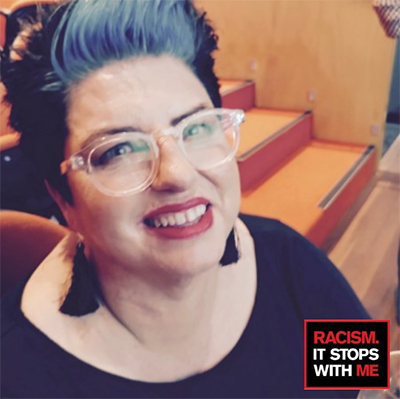 When she was asked how could Australia do better in fighting racism, Industry Professor Young shared this response:

“Leadership that rejects it and embraces the fullness of Australia’s cultural diversity, based in Indigenous culture and presence, every day, in every way, in everything it does. Sometimes this can take a while as confronting those sterotypes is difficult, but when the penny drops, it’s very interesting to see. For non-Indigenous Australians, learning that Blackfellas are not a second-class form of white culture, but a different and separate one, can also be confronting, but always worth it in the end.

Industry Professor Young also shared that she looked to her boss, Distinguished Professor Larissa Behrendt for inspiration and Mick Gooda.

“She is dogged and tireless at promoting justice for Indigenous people, unfailingly generous. Generosity is my favourite trait. Mick Gooda is another person of enormous generosity, and consistency. Consistency is my second favourite trait”.