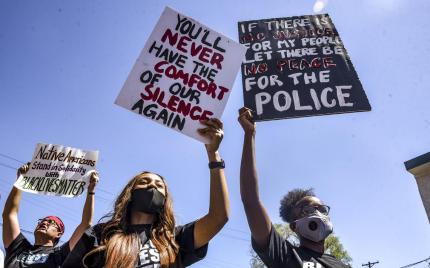 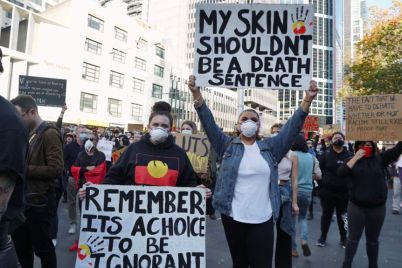 As Black Lives Matter and Deaths in Custody protests have exploded across the US and Australia, we have been told at various times that Australia is not the US, and Sydney is not Minneapolis. Reflection on First Nations’ history since the late 1960s brings to light some striking parallels between Minneapolis and Sydney which bear directly on understanding the current protests. In short, the struggle against police violence and racism has been one of the defining features of modern Indigenous political movements in both countries and began at almost identicial times in Sydney and Minneapolis. Further, these movements were never merely negative protests, they were also quintessentially about advocacy, change and building Indigenous-led alternatives.

The American Indian Movement (AIM) began in Minneapolis in the summer of 1968. A group of Native American activists led by George Mitchell, Dennis Banks, and Clyde Bellecourt called a community meeting to address the issue of extensive police violence, brutality and racism experienced by Indian people in the city. As a result AIM was formed, and it established the Minneapolis AIM Patrol to actively monitor police mistreatment of First Nations people particularly around public housing projects. A national network of AIM patrols were established in 16 cities or communities facing similar problems across the country.

The following year AIM established the Indian Health Board of Minneapolis which was the first American Indian urban-based health care provider in the US. In 1970 the Legal Rights Centre opened in Minneapolis ‘through the activism and support of AIM, African American activists and progressive attorneys committed to addressing the overrepresentation of Indian youth, adults and people of colour’ in the criminal justice system.[1] The Legal Rights Centre still operates today fifty years later, and continues its fight against police violence and racial and culturally based oppression.[2]

AIM continued with its activism, advocacy and demands for self-determination, participating in the 19 month occupation of Alcatraz Island, the establishment of Indian ‘survival schools’ to provide culturally-based education for Indian children and the Trail of Broken Treaties march on Washington DC in 1972 which resulted in the occupation of the Bureau of Indian Affairs.

In inner Sydney, concern over deaths in police custody, police violence and brutality and racially discriminatory arrests of Aboriginal people led to the establishment of the first Aboriginal Legal Service (ALS). During the 1960s, the Aboriginal-Australian Fellowship and the NSW Council for Civil Liberties were involved in a number of important cases over the abuse of police powers in the Redfern area. However, a group of young black activists took more direct action. A meeting in 1969 between Gary Foley, Paul Coe, Gary Williams, Bill and Lyn Craigie and others decided to establish a patrol to observe and collect information on police violence and harassment in the Redfern area.[3] With support from volunteer lawyers, in early 1970 the ALS opened its doors as the first shop front legal assistance service in Australia.

As Gary Foley has written, ‘the establishment of the Redfern Aboriginal Legal Service was to create a resurgence of pan-Aboriginal nationalism as a surge of confidence swept through the Aboriginal community in Sydney’.[4]

In both Minneapolis and Redfern, First Nations organisations born from the struggle against police violence were fundamentally concerned with fighting for Indigenous sovereignty and self-determination. In 1972 both the AIMs march on Washington and the role of Aboriginal activists in establishing the tent embassy in Canberra were powerful symbols of Indigenous nationhood within colonial states. The lesson here is that the struggle against police brutality and discriminatory imprisonment was part of the much broader demands of the civil rights movement. Today, the naked violence of the ‘justice’ system has sparked calls for more radical change.

As one of a new generation of First Nations activists, Lynda-June Coe has said, ‘This is black liberation in Australia… The time is now here to be on the right side of history’.[5]